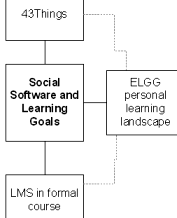 I've been struggling with coming up with a representation of my thinking on the role of social software like 43Things in helping people set learning goals. Dr. Murphy suggested a concept map, so I attempted to create one -- it helped get me on track, but I'm still not getting further on the research methodology or theoretical framework. It's a bit of a brain dump. The addition of the LMS and ELGG were kind of afterthoughts as a way of comparing and integrating the type of "learning goals" that people are already familiar with (the kind instructional designers create for instructors...and students). Feedback on this first kick at the concept map is welcome (and needed).

I've also been collecting and organizing some data from 43 Things. I'm looking at the top 100 goals tagged with "learning" and seeing some obvious patterns emerge. This week I took a shot at categorizing the most popular ones, and it wasn't as difficult as I thought. For example, 29 of the top 100 (representing over 17,000 people) are either goals to learn specific languages (Spanish, French, etc) or more general ones like "learn another language". Another 5,000+ people want to learn to sing or play musical instruments (split into only nine goals). Nine goals focused on learning computer/internet programming languages or specific software are shared by over 4,000 people. And so goes the list, pulling together goals under titles like sports, cooking, driving, photography, and others, each with between 1,500 and 2,600 people's learning aspirations represented. I'm not sure why anyone would, but you can download the complete MS Excel file, which also links out to each individual goal.

So this is all very interesting, but I probably need to start focusing further. More on that later...

Update: Since it was after midnight at the end of a six-hour thesis session following a full day of work, I missed including the most obvious example of social software -- blogs. What do blogs have to do with learning goals? Here's the updated concept map with a few half-baked ideas on that.
Posted by Jeremy at 12:36 AM

Very interesting map. I'm attempting something similar for curriculum implementation. I haven't got to your detail yet...

Good luck, Roger. Let me know how it goes.

For a theoretical framework, we talked earlier about social constructivism. However, maybe you're more interested in the notion of goals for learning. If that is the case then you need to look at the literature on motivation.

You mentioned that you're looking at their goals. You need however to think about your larger purpose-what are you trying to find out by looking at goals?

What are you trying to find out by looking at goals?

I initially focused on learning goals because they were explicitly identified in 43 Things and seemed a likely path to finding out something about the learning taking place around those goals. I'm still interested in the learning (learning content, sharing resources, learners teaching each other, etc), but I believe there's something unique, new and of deeper importance in the ways people use the site to decide which goals to adopt and pursue (or reject). I guess at the core level, I want to know whether it is effective -- are people finding it useful, both in deciding which goals to pursue...and then in pursuing them as part of an informal network that forms around a goal?

What insights did you gain?

The bit of data work I did was mostly an attempt to identify the types of learning goals with the largest networks formed around them, and to see if any interesting questions emerged.

70% of the people sharing the most popular specific learning goals want to learn either a language, musical instrument or a computer language. To get the most data to draw on, these would be great targets. They also raise some interesting comparative questions:
-- learning a musical instrument probably tends to be mostly for personal interest (as opposed to financial gain or career development), while learning computer languages may be more likely to be part of a vocational goal...is this distinction valid, and do differences emerge from the data? Are these goals adopted and pursued in different ways within 43Things?
-- all three goals have the full range of potential learning "channels", including taking degree programs that include courses in those areas, taking individual courses at a university or college, distance education options (as part of a program or individual courses), personal tutors/instructors/coaches, and/or self-study with books, videos or online resources. How do the three goals differ in the types of learning that is encouraged for each?
-- Do each of these goals have a unique learning "culture" that forms around the shared interest? For example, are there significant characteristics of the interactions between users learning a computer language that are different from the types of interactions between people who are learning to play an instrument? What might those differences tell us about the design of self-directed learning environments for different kinds of learning goals?

The list could go on and on, of course...but I should probably take a shot at the next question before digging any deeper.

What insights can you gain by looking at their goals?

I think the web makes it possible for people to effectively set and pursue their own learning goals, without the intervention of the educational institutions that have traditionally been in charge of setting educational goals, outcomes and methods for their students. Even if educational institutions retain their credentialling power, I think we'll see individuals taking more responsibility for their own learning, deciding what/why/when/how they want to learn.

I think this shift will apply most dramatically in career development, especially for self-directed information workers and entrepreneurs...as well as in lifelong learning for everyone in every area of life (spiritual, recreational, relationships, hobbies, etc.) For many of us, skills in setting and pursuing our own learning directions will be brand new or atrophied, and we will need good models and methods for helping people learn these skills as more of us require them.

So, back to the original question. As far as I know, 43 Things is the only example of individuals using the web to set and pursue learning goals in a social context. I think we'll see millions of people using the web for that same purpose in the next ten years, and they'll all want good tools. So I guess I'm hoping to find out what's working in 43 Things right now. Is this type of social software an effective tool for helping people set and pursue learning goals? What are its weaknesses, especially given that it was not specifically designed around the concept of learning? How might personal learning environments of the future take advantage of what already works in 43 Things?

Thanks for these notes and questions, Dr. Murphy.

re: theoretical framework
Yes, motivation does seem to be at the root of how I'm looking at learning goals, and especially how being part of a social network supports that motivation to learn (and seek out learning inside and outside the network). There may still be an element of social constructivism, but perhaps it's secondary. I'll direct my reading that way -- any suggestions?

re: methodology
I think an ethnographic approach is still right...I guess I've been feeling less certain about the type of data I was going to be collecting, which made it harder to envision the methodology.

Just a reminder for myself that Bill Fitzgerald bounced off the concept map and he's thinking about the role of the teacher in these models...an area I've largely ignored.